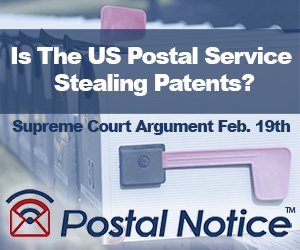 A small company’s patent recently challenged by the U.S. Postal Service may find an ally in a similar argument February 19th, 2019 by the U.S. Supreme Court. The court this session will hear arguments on a case brought by Return Mail, Inc., which claims that the federal government cannot challenge patents approved by the U.S. Patent Office.

Postal Notice, an Arizona company that has developed a system that notifies postal customers the exact moment that mail has been delivered to their box, has had its own patent challenged by the USPS in a similar fashion to the challenge against Return Mail, Inc. That company received a patent for its method of handling undeliverable mail. In both cases the USPS wants the patents to be invalidated without trial before the Court of Federal Claims.

The Postal Notice’s patented system (U.S. Patent 9,609,973) provides benefits and cost savings to mailers and mail recipients. It also is a source of significant revenue for the USPS. Postal Notice allows mailers to increase the value of mailing campaigns by enabling better planning for targeted distribution. Mail recipients also can plan their day as the mail arrives.

The Supreme Court granted Return Mail’s writ of certiorari after its patent was invalidated following a challenge by the Postal Service. Postal Notice owner Anthem Pleasant believes the Supreme Court will decide whether the federal government is a “person” who can challenge a patent through the Patent Trial Appeal Board. That ruling, he believes, will prevent the USPS from invalidating his patent for Postal Notice.

This site uses Akismet to reduce spam. Learn how your comment data is processed.